“No man ever was glorious, who was not laborious.”
–Benjamin Franklin

Someone asked me how my Labor Day was going and I wanted to answer with a little something different:

A lot went on this week, both in my life and in my mind. School’s back in session, for my niece and my brother, and for me, in a way too.

September 11th was also remembered this week. I can’t believe it’s been fourteen years since 9/11 happened.

“To build may have to be the slow and laborious task of years. To destroy can be the thoughtless act of a single day.”
–Winston Churchill

It is thought that twenty-six Canadians lost their lives that day.

On the eve of 9/11, a rainbow appears in the sky over One World Trade Center in Manhattan.

For my latest travel writing piece to be published on the travel blog of someone I really admire.

Thank you, Megan, for giving me a second spot on your travel blog.

It has gotten dozens of RT’s on Twitter in the last week.

First it was our interview.

Of course we can!

It’s a little like swimming at night. I’ve long wanted to do this and I thought of it, again, on Labor Day.

It’s a bit of a frightening thing, the thought of being out there, at night. I guess it’s the way I live most of my life, stepping out, in the darkness of the unknown, but taking the plunge anyway.

For the chance to spend, what was said to be the hottest day of the year, in the water and so I didn’t even notice the heat they spoke of.

We decided to spend our Labor Day at the lake. We are lucky to live so close to all those fresh water sources.

In life, sure, I’m improving. However, I mean that literally because I have been told, by doctors on more than one occasion, that I am incredibly flexible. My muscular skeletal system can bend in strange directions.

So, when I decided to jump in the sand, right along with my nephew, I just so happened to land on a log that was sticking out at my feet.

Luckily my ankles are one of those highly flexible parts of my body and although I went down, landing hard in the sand, my ankle did turn over but did not sprain badly. I felt it go over sideways, but I have stretched out those muscles so much over the years, leaving little to no pain as a result.

The opportunity to chase seagulls with my nephew wasn’t to be missed. Just thankful I walked away from that and did not have to crawl back to the car on hands and knees.

For literacy and education.

I would be lost otherwise.

For the education we’re lucky enough to have in Canada, as my niece begins kindergarten this week.

She is smart and sharp and bright. She learns so much and loves to share it. She surprises us all with the things she’s learning everyday. and I know she will do amazing things as she grows.

It’s a good thing John Oliver is not her teacher.

For the premier of the newest in late night television.

Stephen Colbert makes me smile and I look forward to his jokes and his unique style of interviews.

One of his first guests, on his very first week, was George Clooney. They discussed and even showed a clip of George’s new film: Decision Strike!

Sounds impressive, doesn’t it? Well, don’t go looking for it in theatres in the coming weeks or months, as it is only a fictional movie, as he did not actually have anything real to promote. Sounds impressive anyway.

With all the talk of the heating up of the late night show wars, now that Colbert has thrown his own hat into the ring, Stephen made light of this when he mentioned all the thoughtful first-week gifts the other late night comedians have been sending him. He joked that they could all be expecting the best thank you card ever, with the words: GO THANK YOURSELF, written in them.

For whatever it was that got me a replacement battery for my iPhone 5 and finally, after talking about doing it for months.

I put it off for too long. Not sure why. I can actually go a whole day and my phone does not die, a beautiful thing. This will be necessary for my trip to Toronto later this month.

I went in one of those crazy Apple stores, so hip and which make me feel very uncool. They have the genius bar. Well, I was informed of some loophole which made it so I did not have to pay the $100 for a new battery. Okay by me.

It just so happened to be September 9th and the big reveal day for Apple. I did not upgrade to the newly revealed iPhone 6S. My iPhone 5 works just fine, but it’s amazing just how revolutionary the iPhone has been for so many, but for anyone who is visually impaired especially.

For the people, in my life, who have gone through the loss of a loved one to suicide. They teach me things, all the time, about survival and resilience.

Sometimes prevention isn’t possible, upon looking back, no matter what anyone could have done. That doesn’t mean we stop trying.

I know life is forever altered for them. It isn’t easy and life will never feel happy, truly happy again. I just hope they know someone is thinking about them, always.

The day was such a beautiful one this year, the weather anyway.

“She had always wanted words, she loved them; grew up on them. Words gave her clarity, brought reason, shape.”
–Michael Ondaatje, The English Patient

For a dream come true – a dream of clarity, reason, and shape.

First I was accepted into an anthology, with my short story: One Last Kiss.

Then it came out, on Amazon, but first only as an ebook.

It wasn’t until this week, finally, that I actually got to hold a print copy of the book in my own hands. I could feel the weight of it, turn the pages, and smell that signature bookish smell, all knowing my words could be found within. It is an indescribable feeling, a dream come true for me, and I will never forget what that felt like. 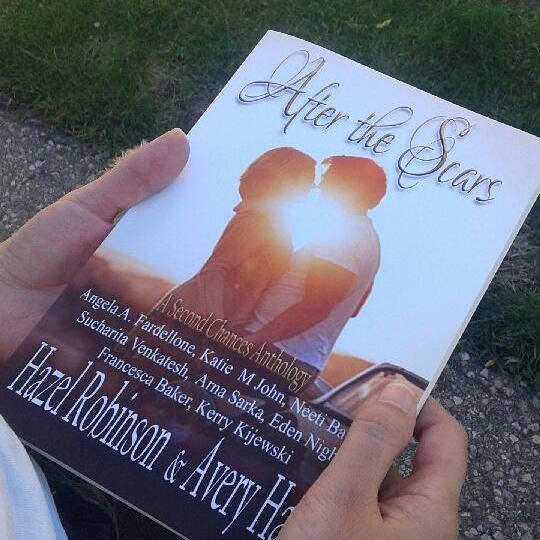 For a friend, somebody there on the day the book arrived in the mail. Someone to celebrate with.

We got Dairy Queen confetti cake blizzards to celebrate. Her five-month-old daughter sat, in her carrier, staring at me and I wanted to share, but unfortunately she isn’t eating ice cream, not just yet. I loved celebrating with her too, all the same.

Thanks, Mom, for bringing the book over.

For the best, most loving parents my nephew could ever have. And it all began on that warm day in September, back in 2009 – Happy Anniversary guys!

I will never forget that summer, that day, as long as I live. It was the day my sister had worked so hard for and looked so forward to. I got to be in the wedding party and was happy she allowed me to give a speech at the reception.

My sister’s favourite movie is The Princess Bride and she wanted my uncle to sing the theme song from the film, at the wedding. It made it special, unique, and all hers. She wanted to get married in our back yard, of the home we grew up in. It was a wedding at home and meant so much to all of us.

I am thankful I’ve gotten to share my words, more and more, in recent days and weeks. I guess, for me, the need to share my words with the world goes back to all that stuff I said about night swimming.

It’s scary, certainly, but the idea of being swept up and away, washed out there and with no sign or footprint to show that I was ever here, that is what I am most afraid of.

Sure, the chance for rejection is ever present in the present, but not nearly as great as that there could be no proof that I ever existed in the first place.

“I don’t know how long I kept at it…
I felt reasonably safe, stretched out on the floor, and lay quite still.
It didn’t seem to be summer anymore.”
–Sylvia Plath, The Bell Jar