“Writing and reading to me is synonymous with existing.”
–Gertrude Stein

What a difference a week can make.

Last week was the perfect autumn weather and this week all I keep hearing about is snow.

Last weekend the Toronto Blue Jays were not expected to be in the game for much longer and this week they still have a chance.

I seem to remember something about a book of rules for the TToT and there’s one of those for baseball, not that I understand it, but more about that later.

It was a difficult week, in some respects, but only because I am finally putting myself out there, my writing and myself, and receiving feedback. This translates into criticism and that can be difficult to take sometimes. Doesn’t mean it isn’t worth it.

For my immune system.

Mine works for me. Okay, so I may be singing a different tune come the middle of winter, but at the moment I think all’s well.

I have been around several sick friends and family in the past month and I just assumed I would catch their colds, etc.

I haven’t. I have a lower immune system, as a transplant recipient, and it can seem to permit multiple colds each winter, every year, but it is unpredictable. I can’t predict when or if I’m going to get a cold.

I am visiting a friend in Toronto tomorrow and her niece is there recovering from a bone marrow transplant. As long as I don’t jinx myself and come down with something in the next twenty-four hours, I will be happy and thankful. Not to mention, my immune system hasn’t decided to completely attack my father’s kidney, in nearly twenty years, so that’s something to be grateful for.

For a delicious cup of coffee, some relaxing Lorde inspired tunes, and a couple of hours at the salon.

The coffee and the half hour I sat there, listening to music playing and the hustle and bustle of my cousin’s salon, while my hair had foils in it and waiting for the dye to do its thing made for a most relaxing break.

For the chance to feel like I was dressed up and with somewhere to go for the evening.

For the deliciousness that is movie popcorn.

For a totally eye-opening documentary experience.

“Our voices are our most powerful weapons.”

I went to see He Named Me Malala and I found it to be every bit as inspiring and moving and sweet and real as I thought it would be.

This film needed to be made and it needs to be seen around the world. It makes me cry, but it forces me to be thankful.

For the game that kept Toronto in the running, for the first time in over twenty years.

It was a real rush to know that we had little chance, at that point, but that I never lost faith. It ended up being one for the record books, and I don’t pretend to understand all the little ins and outs of the game and its rules, but I know the tension and the energy felt, sitting there watching.

We were losing two games in a five game series. Nobody thought we would go on to win the next three, but I believed.

What is it about rooting for one’s sports team that can cause such strong feelings and stress?

For my white cane. 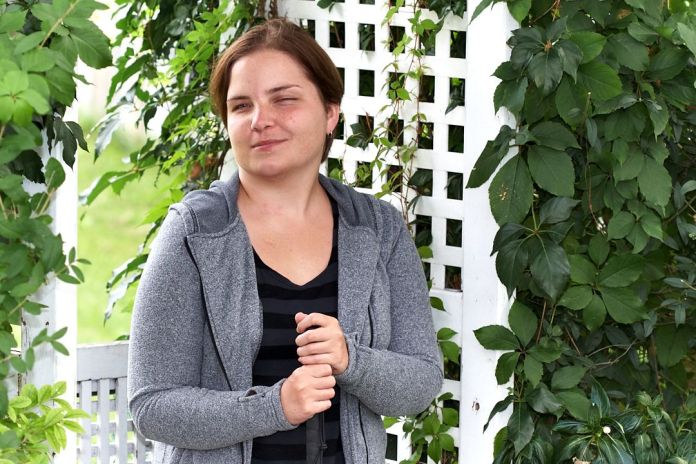 October 15th was White Cane Day or White Cane Safety Day. I feel like a lot of these days are more US based, a lot of the times, but it doesn’t really matter where or what day.

I will admit that I have had my battles with the white cane. I have truthfully felt embarrassed about it, like a little brother or sister, always tagging along, but being forced by a parent to let them join in the fun.

Yeah, I’m working on getting over my issues because without it, I would be in more danger and would have been left without the means to get somewhere, anywhere, unable to see my surroundings well enough. I can’t deny the importance it has played and must play to me in future.

Traveling With the Speed of Sight

I think I’ll stick with writing my blog, but it never hurts to try something new.

For you never knows’.

I did not expect a lot of people to listen to that interview, honestly, but all it takes is one.

One of the writer/editor friends I’ve made online and on Facebook just happened to be listening and immediately messaged me after the interview ended.

I admire her and her work so much and her online publication is at the top of my list of places I am determined to see my writing on.

For the good and the bad that comes from putting myself out there.

Sure, this week I received some hard to hear criticism, but I also received some personal invites to submit my writing and to do more guest posts.

This, to me, would be considered a week of triumphs.

The Canadian federal election tomorrow could be the change we need, but there is a bit of a clash of events happening.

Oh, don’t we Canadians have problems in our country?

At least we’re aware of the issues that are important to us and as long as we know our priorities, right?

I’ve been inspired, again this week, to not be silent, in whatever way that might be.

I love the female voices I’m hearing lately: both young and old.

Do I look scared to you?

“There’s a moment when you have to choose whether to be silent or to stand up.”
–Malala Yousafzai