I can’t see silver and gold anymore, but at least Canada still has net neutrality. 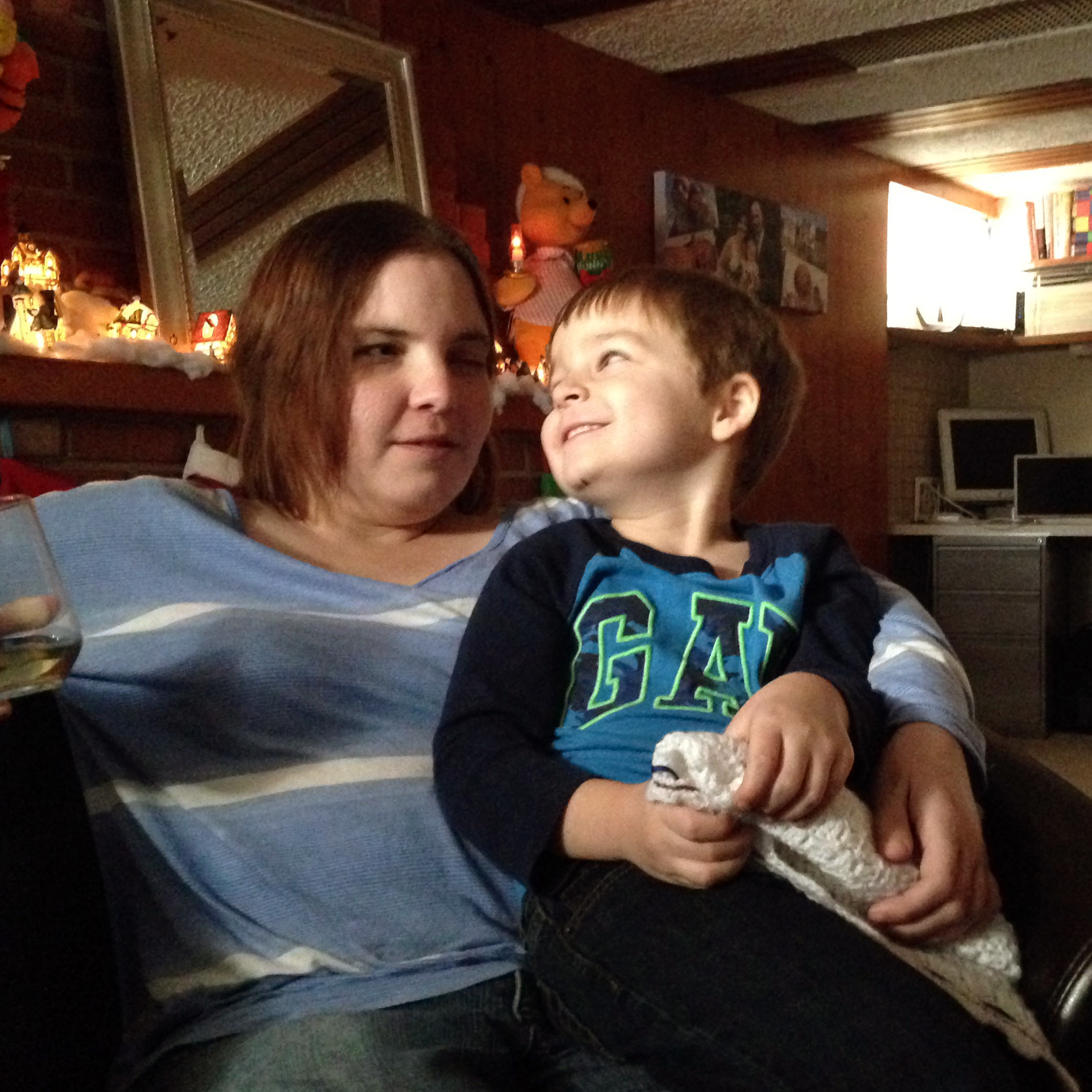 Photo caption: Max and Auntie Kerry. My favourite picture, though I cannot see it.

I have been watching many of the holiday programs in the run-up to Christmas: Home Alone, Rudolph, and an old Frosty classic.

My jolly holiday spirit has been waxing and waning this year, all depending on the day, which is why I am still here with my third Christmas season with Ten Things, keeping the gratitude going and written for the record.

It’s funny, that the Christmas song I ended last week’s TToT post with (all about the kind of snow we get here in Canada) and then that is the one Christmas song Sarah Slean chose to perform at her concert that night, the one I am happy to report I got to enjoy. This leads me to my first thankful for this last week before Christmas finally arrives.

I’m thankful for the weather holding back, if not the bitter cold, at least the blowing snow.

I live over an hour from Toronto and where most of the concerts are. I am thankful the weather cooperated and that I had family willing to make that trip, to drive me to see Sarah Slean and her band live.

December in Ontario, Canada can be unpredictable, but though it was so bitter cold, I was eventually warm inside the intimate venue, with some lovely music and a good friend.

I’m thankful for a truly uplifting early Christmas gift of a concert, with a friend and fellow writer.

Sarah sang beautifully, with a woman who doubled as backup and cello. She also had a guy on the drums, violins, and viola players. Slean herself, as well as being lead singer, played piano.

She even forgot the first line of her big single (Sarah) and had to stop the music and shout out for the lyrics. It was a sign that nobody’s perfect and we all forget things and make a mistake, if you can even call it that. We are all human. It happens. She has been writing songs for something like twenty years and her audience of all us fans were understanding.

Sarah spoke, in between songs, about the shelter she volunteers at in Toronto and the people she’s met there. The concert was raising money for food for Christmas for
St. Felix Centre on Facebook.

She spoke of the snap judgments we are all guilty of making in our daily lives, using one of many hashtags during the evening (#GOTrainPhenomenon) for what happened the night it was just her and one scary looking man on a GO Train. When you’re trapped on a moving vehicle, you have nowhere to run and hide, which can open your eyes in unexpected ways.

She considers herself something of a #SongWitch for what happens to her when a set of lyrics and piece of music come to her and become something special.

Her lyrics are heartbreakingly beautiful and wise.

I’m thankful my friend and guest (her birthday being the next day) and I could talk, even during intermission, and her spirit could be lifted just as mine was.

We struggle with writing, at times, but we shared our experiences, back and forth. I know we inspired each other to never give up and to continue on this path we’re both on.

It was different songs that spoke to the two of us, but all that matters is we got something special and unique out of it.

Mine was the first song Sarah sang, about there never being a perfect sky and right away I was listening. She had my attention for sure. I am often afraid I will one day no longer even see what sky is, but the message about not waiting for some perfection that will never come was duly noted.

For my friend, it was a song about finding the right words and that endless search to say exactly what it is any of us wants to say.

I’m thankful for more speaking up and activism from a powerful advocate and friend, after an unexpected piece of news.

I went to the Sarah Slean show, happy to avoid hearing the news of the vote in Alabama that I’d been hearing, frankly, too much about.

What happened in that state was and is a smaller scale example of the disbelief I have for who is POTUS right now. It is all so nonsensical and disgusting. I feel like I live in some kind of upside-down world, on a daily basis, even from my semi-regular life here in Canada at this time.

It’s a sign that sure things shouldn’t be assumed/presumed or counted on. It felt like all those who mocked anyone for their confidence in Hillary Clinton winning the presidency, like it was such a sure thing in 2016, were given a taste of their own medicine here in 2017. Cockiness is not such a good attitude to have when it comes to these things.

Enough people, the right people weren’t having it and I will let Kerra speak on the rest.

I am so proud to know her and that she has found this place for her opinions on the fate of her birth country.

I’m thankful for people to check on me when I’ve had a bad day and couldn’t be found.

I stay in touch with someone, as I am on my own a lot, and then I have my bad days when the pain makes me want to sleep and shut out the world.

I appreciate being left to this sometimes, but I know I am always being watched over and protected.

Whether it’s family or neighbour, it is a nice thing to know.

I’m thankful for a pleasant and successful final National Foundation of the Blind Peer Advisor conference call before the holidays.

We are a team in many ways. We support each other in our limitless pursuits. It’s a good group.

We speak, by phone, one Thursday evening each month. This was our evening to hear about holiday plans and traditions. Still, I am the only peer advisor from Canada in the group. One woman calls from Australia.

Maybe we will all meet in person one day.

I’m thankful for such fun kids in my life.

It was a wonderful pre-Christmas Saturday with my niece and nephew.

My niece has herself a dollhouse, which is actually for a family of bunny rabbits. My nephew played with his big sister and her rabbit family.

I sometimes like to join in their games. Other times, I love to just watch and listen as they play. They fight, like siblings often do, but they love to play together too. It’s super sweet to witness the fun they have with each other.

I believe that is his name, their Elf On The Shelf, who shows up somewhere new every morning leading up to Christmas.

My niece and nephew enjoy looking for him in a new spot every morning, like hanging from a light, as he was the day we were there.

I guess, I don’t really know the rules, as this wasn’t a thing when I was growing up. Still, they seem to love it. It is one of the special holiday traditions they have as a family.

I’m thankful for such smart kids in my life, asking questions.

My brother had the new Blue Planet oceans shows all downloaded and my niece was all into learning about sharks. She could become a scientist (marine biologist perhaps) or an artist. That’s what is so amazing about her. Her future, with all that curiosity and intelligence, is wide open.

My nephew is settling in at school his first year and making friends. He is so inquisitive and full of life. He makes me smile, the sweetest little soul.

They asked questions and seemed to begin to understand, more and more, about what blindness means in their aunt and their uncle.

I am glad we could share a love for marine documentaries and colours.

Thanks for the hospitality goes out to my brother and sister-in-law, for the snacks, and the holiday cheer.