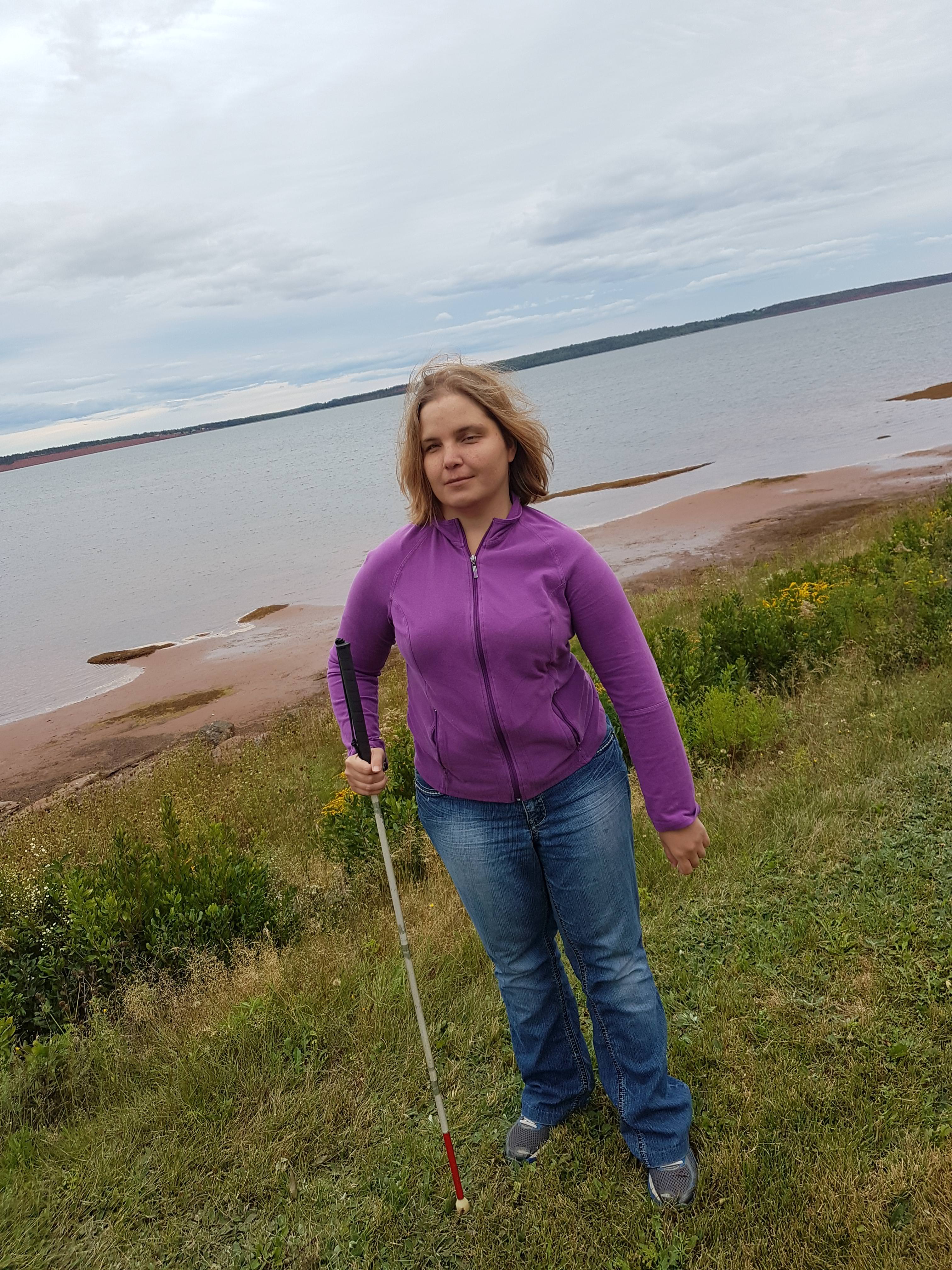 Caption: myself and an ocean view.

This month, I got to share my love of travel with Expedia.ca in an interview, “Travelling While Visually Impaired: An Interview with Blogger Kerry Kijewski”, for their Travel Sensations series, to show the world that there is more to it than the sights we see. My delight in these journeys I go on is in every other part of the experience of it, the wonderment of it, the thrill of it.

I could not see the famous red, iron-rich soil or the green, rolling countryside of Prince Edward Island in September, but I could feel the breath leave my lungs and the raw wind whipping and numbing my cheeks, as I stood at East Point on that same island. The East Point (or End of the World as it’s also known) showed me the wild force of the Atlantic Ocean.

Whether I was enjoying a peaceful, lone walk along the boardwalk and beach of Summerside. Or, the discovery of my perfect spot along the shore at a place called Red Point. Or else, wrapping my arms tightly around myself, as my ride on a lobster boat found me bumping along, from Charlottetown Harbour, out to sea.

I held a large clam in my hand and explored, by touch, the seaweed that hangs from giant rock formations or washes up with a receding tide. Where once I walked on rock, water appeared there, in the matter of a dinnertime meal. What sounded to me like the voice of a whale, was really only the boats, along the dock, as the oncoming water lifting them, their creeping hauls, up and up.

My hotel faced out to the beauty of Fundy, as I heard distant clanging bells at sea and the hushing night song of that incredible tide lulled me to sleep.

I got to experience the island home of a great Canadian author (Lucy Maud Montgomery), the quiet early twentieth-century life she once lived there, loving it like my own.

As I explore more of this country I adore, I miss what I won’t get to see, while embracing what my other senses can tell me about where I travel.

There’s a new term I came up with, as I stood at the railing of the stairs that took me back up from Hopewell Rocks, Bay of Fundy, New Brunswick.

Like that line I once saw with greater clarity, the one where the sky meets the water, as the water meets the sand – “brush” is the sound of an intermingled roaring, rushing waves and blowing wind. Sometimes, like at that lookout point where I saw not a thing, I heard the blowing of the wind in my ears and the roaring of a coming tide and suddenly I realized I could not tell one sound from the other. They had become one, an echoing in my head.

Such sensations in me, travel provides these, and much, so much more yet awaits.