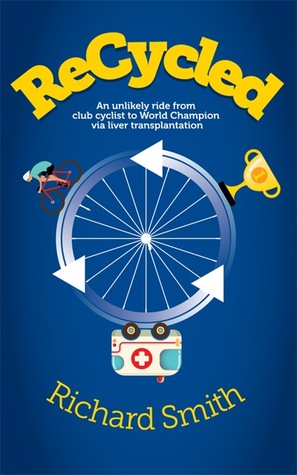 Below is a review from a fellow blogger, about a man who received a liver transplant and who has his life and energy back and is now able to do what he loves best, cycling. He came back from the brink of death with catastrophic liver failure and made it to become a simultaneous title holder: British, European, and world cycling champion at the Transplant Games.

Damn! That’s the trouble with being the twenty-fourth reviewer of this wonderful book: all the best adjectives have gone. Oh well; I’ll just have to think of some more:

Unputdownable:
I began reading ReCycling (excellent play on words, by the way) in short bursts, alternating it with another book. This is not to be recommended. This book should have your undivided attention, without multitasking. I was greatly relieved when the other book was finished so that I could concentrate on this one, and I then finished it in two sittings.

So very interesting:
A fascinating, sometimes harrowing insight into the world of organ transplantation told from the perspective of someone who’s been there, experienced it, lives daily with its ramifications and can really tell it like it is.

Non-nerdy:
You really (trust me) don’t need to be a cycling fanatic to enjoy ReCycling. Enthusiasm for biking isn’t a prerequisite for enjoyment or empathy. Honestly. I now know more, having hitherto been completely sports-illiterate, about the cunning tactics of the various forms of biking (previously I’d thought you just set off from the start line and pedalled like hell), than I could ever have imagined. This is now the only sport that I can have a halfway-knowledgeable conversation with others about.

Heart-wrenching:
Like blood donation, organ transplantation is not a subject that occupies the consciousness of most of us on a regular basis, because organ failure touches (thankfully) comparatively few. Richard Smith’s entirely non-self-pitying recounting of his near death but chance of a second lease on life thanks to the imaginative, far-seeing altruism of a donor and emotional generosity of that donor’s family is deeply, deeply affecting. As are his descriptions of the fellow-transplantees his interest in cycling has led him to meet.

Rib-tickling:
But when he’s not delivering his very serious message, Mr Smith has you chortling with laughter. He certainly did me, frequently. This boy (as Eric Morcambe might have said) is a born comic writer. I have to confess shamefacedly though that I did very badly in his frequent tests. I think this is the first book I’ve read that’s been part literature and part exam paper.

Inspiring:
Boy; wasn’t it just! R S certainly wasn’t prepared to let a life-changing event like total organ failure and life ever afterwards on immunosuppressant drugs to keep him alive cramp his sports-enjoying style. Like also-admirable Paralympic athletes, he’s achieved far more in terms of not letting a catastrophically failing liver grind him down and striving for personal optimal success than most of us couch potatoes will ever do. And written a brilliant (another great but appropriate adjective re-used) book about his remarkable achievements and the crying need for organ donation too.

Make you laugh/make you cry is a familiar technique used by TV charity appeal shows and this book does that superbly. The final three killer paragraphs (I won’t spoil) had me with eyes wet and throat tight, but that’s fine. Manipulate my emotions all you want. Feel free.

I can pretty confidently predict that ReCycled will win the prestigious John Needham Personal Fave Book Of 2014 Award. Read it, and join the donor register! Seriously.

Bravo for a very fine book, Richard Smith, and good luck with your campaign.

Thank you John for bringing this man’s story to my attention. Richard Smith’s book can be found
Here
or
Here
and I am glad to share this story and John’s review as well.

It’s important to spread the word about not only the statistics of organ donation, but the personal and uniquely human stories of the ones who experience it up close. Richard went on to form a strong bond and a friendship with the family of his donor. Not all are able to do this, to create such a truly special relationship and carry it on.

The other day, June 5, was the seventeen year anniversary of my kidney transplant. My father gave me a great gift that morning and I will always remember what that unselfish gift gave back to me. I am always happy to promote the need for organ donation because it truly does improve lives every single day.