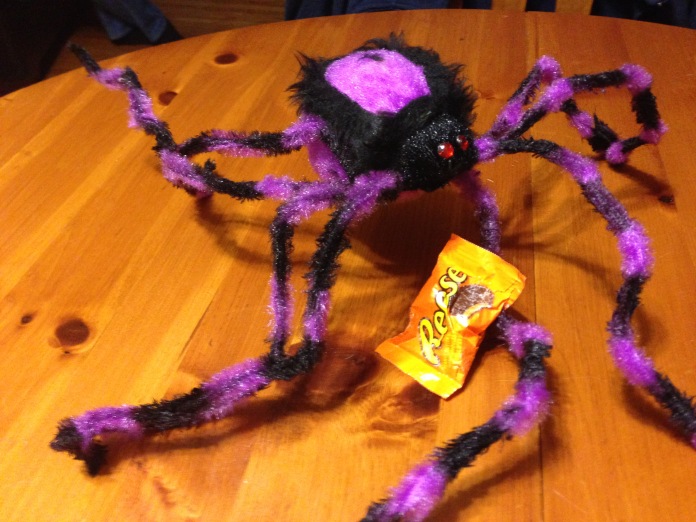 Who likes to be scared?

I watched a scary movie, but waited until after Halloween was over, as if somehow this made me safer. I believe it was the third and worst one, according to King, the king of the horror genre.

I know. I know. I am aware that Halloween is done and over with, that it is the start to a brand new month, and Christmas merchandise is beginning its reveal in stores, but just stay with me a minute or two, or as long as it takes you to check out this edition of the TToT.

Since this is about the week that just was, there is a clear Halloweenish theme to it, but this includes lots of chocolate and candy talk and a reminder added to the title, to remind everyone to turn clocks back one hour, if they haven’t already.

If so, what are you waiting for? Did you forget? That would explain why things seemed off all day.

For the chance to be featured early in the week.

After The Scars: Featured Writer’s Series

I was interviewed about my story on the new website that has been launched for the anthology I am in.

For a chocolate adventure – the best kind in my opinion.

A friend and I went for a drive to a nearby town and to try out the chocolate shop I’d been told about.

I hoped it would be better than the one here that my mom, sister, and I tried during the summer.

This place was all made-in-house, but there was sugar this time. I am one of the many hooked on sugar, I can admit it.

So good I think they would make excellent Christmas gifts – and, just in case the name isn’t obvious, they also sell tea.

For raspberries and laughter.

My friend’s little girl now blows raspberries. They are cute and all, except, maybe, when she decides to keep her mother awake for an hour with them at 3 A.M.

The giggles are new, to me, this week upon seeing her. It’s the best noise in the world. Enough said.

For my “second chance” to be featured this week, about or with my writing.

First it was for The Second Chances Anthology and then for 1000 Voices Speak For Compassion.

If a Tree Falls in the Forest

The #1000Speak blog asked me to write the guest blog for this week on their website and I thank them for the opportunity.

Sure, it’s just candy, but something about the size of the chocolate bars, makes me think I am in the clear because I am eating less, but I realize, after Halloween is over, the trick that was just played on me.

Well, anyway, it makes it fun and it brings back many memories.

My siblings and I used to all gather on the wreck room carpet at the end of the night, dump out all our candy, and share and trade with one another. My father would stand by to snatch his favourite chocolate when we weren’t looking.

For the humorous side of this horror filled holiday.

Without that, I would find it harder to handle the scarier elements. I need a good mixture.

For little trick-or-treaters, or not so little, as the case may be.

Yes, from the smallest to the very big. The small ones are sweet, but some kids find it hard to give up free candy.

When should kids stop? We were debating this question.

Some of them say the funniest things. The little ones are often so polite. The rain fell for a while, but they were troopers.

We gave too much away at the start, which left us rationing by the end. We eventually had no choice and had to close the door, but a handful of kids kept coming. They very well could have been pissed and returned aiming for blood, or aiming with eggs as the case may be.

As a matter-of-fact, I am thankful I have never been toilet papered or egged in this house. I do live near a school and park. Could be the perfect target for punks, if they wanted to.

For my favourite little trick-or-treater of all

My friend returned, this time with her little pumpkin.

This particular jack-o’-lantern is only six months old. This means she has no teeth yet and can’t eat candy or chocolate. 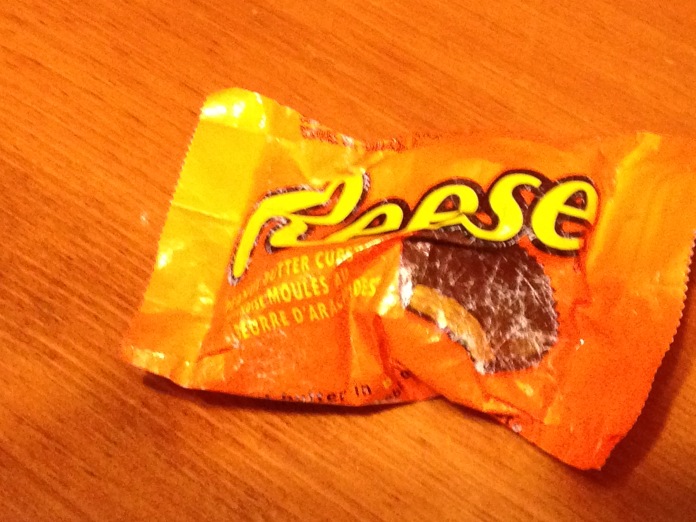 She sure tried her hardest. I don’t know if you can tell from the photo of the evidence left behind, but she chewed on that Reese’s Peanut Butter Cup for quite a while. It didn’t end quite like she’d hoped, but she had fun trying.

That was one heavily drooled upon package of mushed up chocolate.

I Walked with a Zombie – REM Version

I, myself, did not walk with any such thing. I would say zombies are some of the worst creatures there are, even though people have gone crazy for a show about them. I get totally creeped out. Even Brad Pitt wasn’t enough to make them tolerable to me.

Thanks to my brother (music expert extraordinaire that he is) for the strange and unfamiliar Halloween themed song selections.

And, to the departed Mr. Lugosi, you will always hold the place of Dracula and no disrespect meant Sir.

Well, another Halloween over and I still didn’t manage to finish reading Dracula. So, here’s a quote from Dracula’s literary horror rival instead.

“So much has been done, exclaimed the soul of Frankenstein–far more, will I achieve; treading in the steps already marked, I will pioneer a new way, explore unknown powers, and unfold to the world the deepest mysteries of creation.”

–from “Frankenstein” By Mary Shelley

He was the badass of his day…

Until I became enthralled by the world of Tolkien’s Lord of the Rings, I was not aware of Sir Christopher Lee.

I had seen him in Sleepy Hollow, but I would not know him from that, if I had been quizzed on the man and the parts he’d played.

The first time I heard Lee’s signature gruff, deep tone, I was a fan. His diction was brilliant. He seemed like a man who meant business.

He seemed to be born to play that role. I was thinking and just saying to a friend that it is bazar how to past generations he will always be more well-known as Dracula, but to me he is and always will be Sauroman.

From “Dracula” to “LOTR”: Remembering the Genius of Sir Christopher Lee

I did not get to meet him or get to know him, like cast members of LOTR, but I can tell that he is one of those rare humans who are larger than life. His brilliance is obvious. His cultured and knowledgeable mind and his sharp wit were most clear in interviews.

Christopher Lee was only Lord of the Rings star to meet J.r.r. Tolkien.

I was born more than a decade after Professor Tolkien’s death. Since falling in love with Middle-earth, Sir Christopher Lee is Professor Tolkien to me. He embodied everything I could imagine Tolkien was. He is a figure of legend, taking on the roles he did over his lifetime.

His monster roles will live on in all their gruesome glory.

He seemed to have a knack for portraying villains.

He played an evil Bond character.

Other than Yoda, his character was the only good thing about the Star Wars films really.

He seemed proud to have worked with Tim Burton in films like Alice In Wonderland and The Hobbit with Peter Jackson.

He had the pronunciation down. He could speak many languages. He liked to sing (opera, musicals, heavy metal) and his singing voice was as powerful and great as his knowledge of Tolkien’s stories.

On discovering LOTR, I purchased the extended edition DVD’s and not only did I lap up the movies, over and over, I also became engrossed in all the extra bonus features included.

One of the interviews with Peter Jackson he spoke to Lee about the sound one might make when shot. Jackson was just doing his job, giving direction as to how he saw the scene. It was then that Lee spoke up and informed his director of the proper sound a man makes when hit. Apparently, it’s an intake of breath. Chilling stuff:

“I’ve seen many men die right in front of me – so many in fact that I’ve become almost hardened by it. Having seen the worst human beings can do to each other, the results of torture, mutilation and seeing someone blown to pieces by a bomb, you develop a kind of shell. But you had to. You had to. Otherwise we never would have won.”

I wonder, as I do about my own grandparents, just what it was like for Lee during his duty in World War II and I heard he wasn’t talking about it.

I grew to love the songs at the end of all three LOTR films. The final one, by Annie Lennox:

Into The West – Lyrics

I must have played this one over and over on repeat, to the point of driving my sister/roommate to the brink, forcing her to yell at me to turn the damn thing off.

I remember the way Gandalf spoke about the west.

A metaphor for death, Sauroman did not speak the lines, but now I think of them as I contemplate where Lee is now.

Is he somewhere with Professor Tolkien, discussing the world during and since their deaths? What are they discussing, if they could be friends somewhere beyond my understanding?

I have been thinking a lot lately about those who are no longer here, my grandparents mostly, but since I heard Lee had passed I began to wonder all the more.

I have always had a healthy fear of the sea and the idea of what it might be like when one dies is always lingering in the back of my mind, but the way in which the concept of death is explained by J. R. R. Tolkien, in Lord of the Rings, seems to connect death to a calm sea and a distant shore beyond. This most peaceful image of a grey mist, rolling back to reveal a clear glass that is sky and green shores, this has brought great peace to my heart.

Lee died at age ninety-three. He is survived by his wife of many years and their daughter.

Life is meant to be lived and Sir Christopher Lee lived it better than anyone I can think of.