Once again, I have been absent from this
Ten Things of Thankful #10Thankful
exercise in gratitude and I did mean to join in more, but life got in the way.

I am thankful for
Kristi
and her taking on the TToT and for making a lovely effort to ensure accessibility is as common as possible, even with all the things that are out of her control.

I am thankful I got to attend an old friend’s wedding back in November. 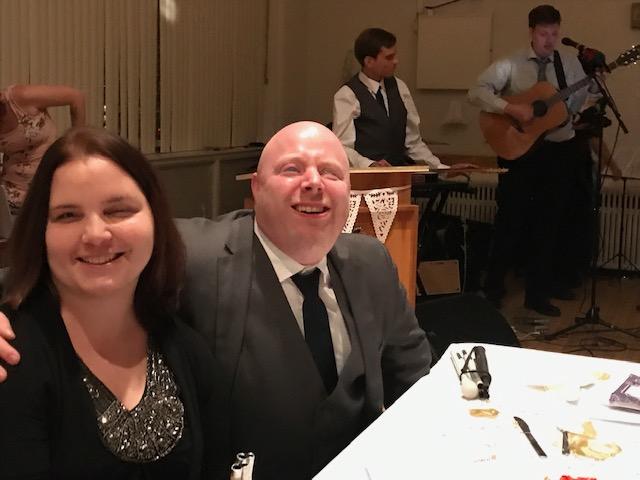 It was wonderful having a celebration with good friends and family too. The event wasn’t too big and I danced as much as possible.

I am thankful for a fun few days with friends (both old and new) at Social Media Week Toronto, only a few days after the wedding. 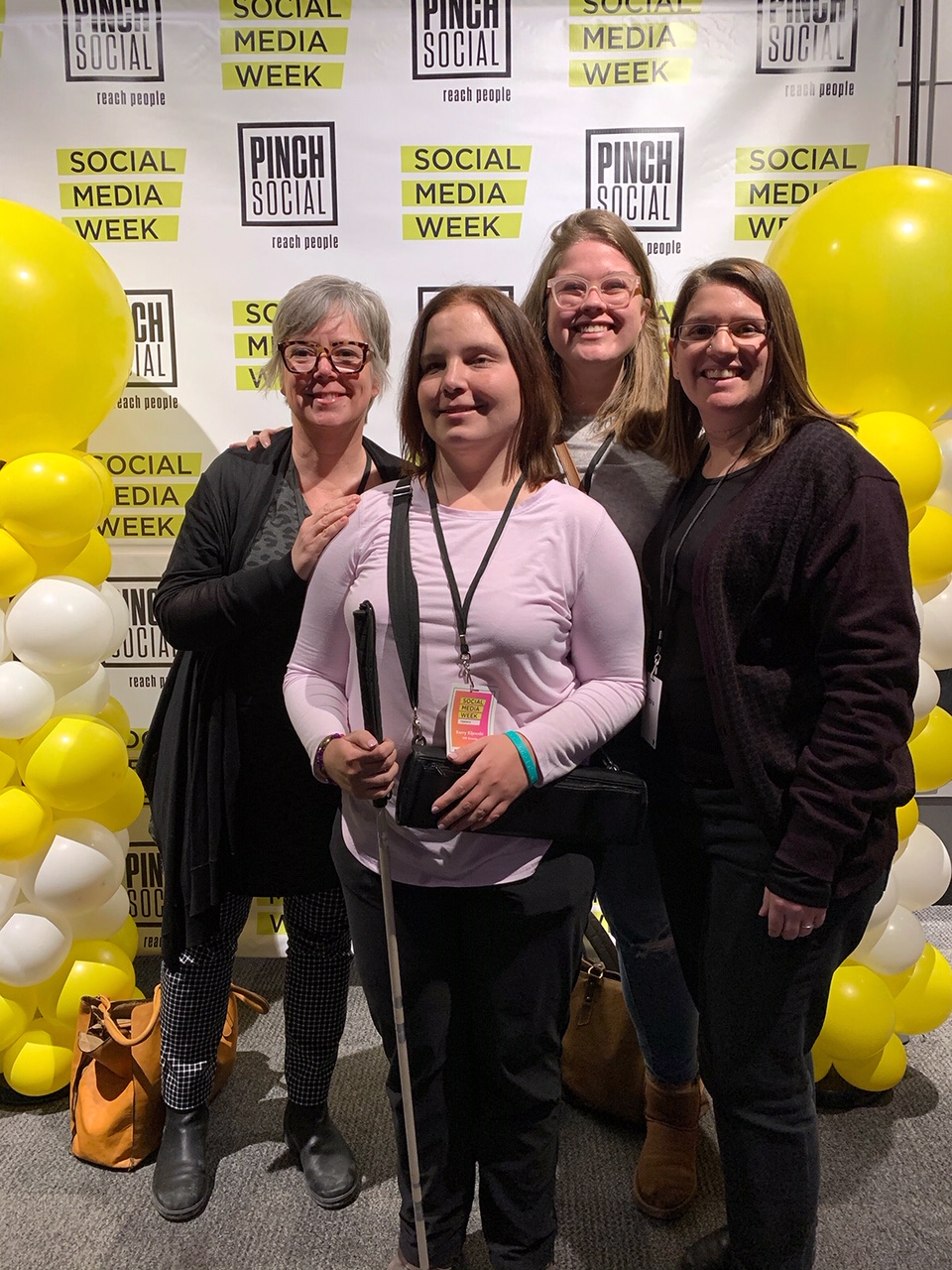 Caption: Kim, me, Amy, and Victoria

It was a nice getaway to Toronto and it was cold, mid November, but I was mostly thankful for the slight warm up but still cold enough, on my last evening in the city, with the most delicate snowflakes falling as we walked to find some dinner before I had to catch my train home.

I am thankful for the chance to be a guest on a podcast about culture called
Culture-Hacking – “Seeing the World Differently”.

I am thankful for a fun-filled Christmas season with family. 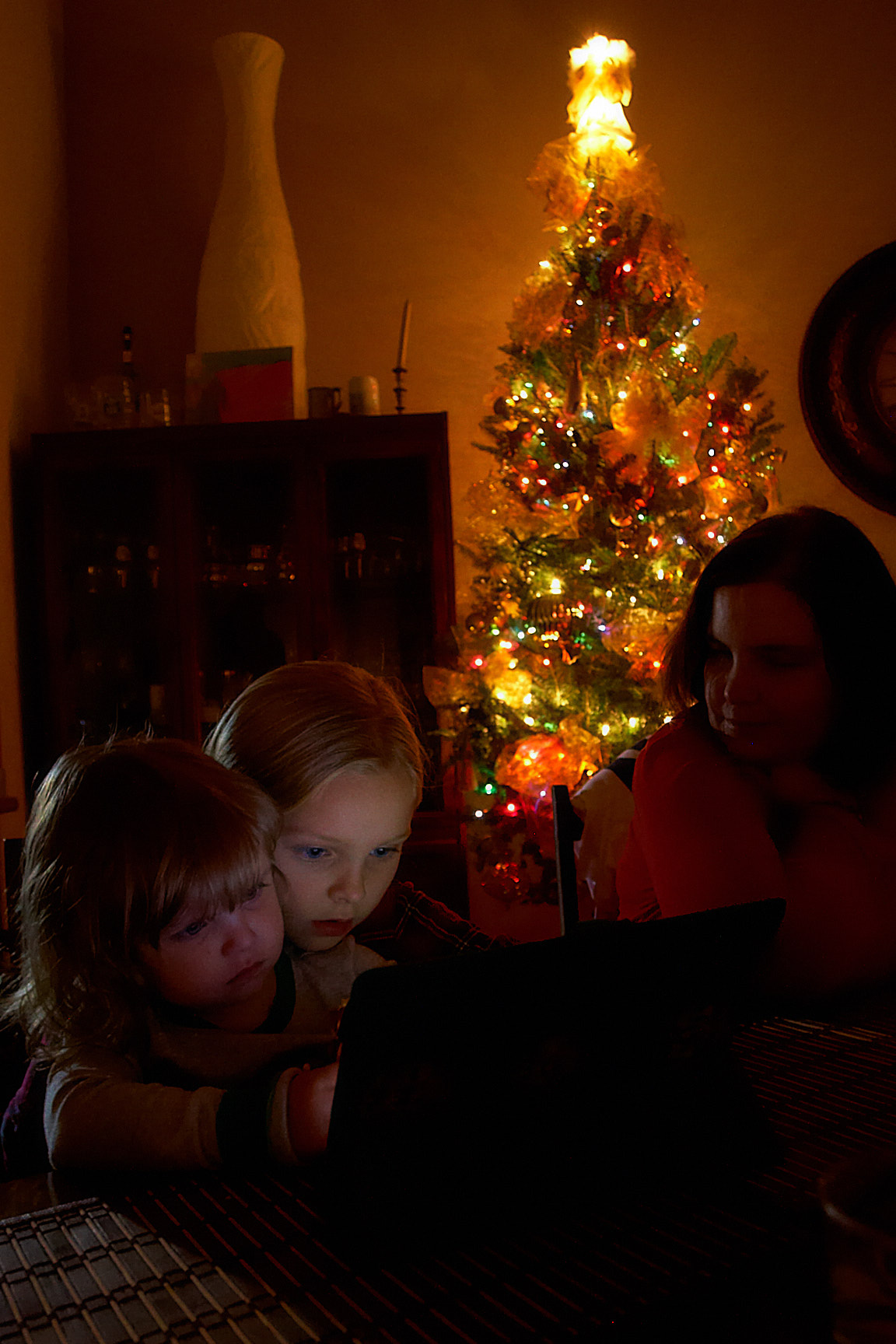 Caption: I’m with my nieces, watching The Simpsons on the tablet, with the tree in behind us. (Hmm, did I end up posting this photo more than once?)

I am thankful for a speaking gig I had lined up for January.

It was good to get to speak to a room of women from the older generations, to share a bit about my blindness experience, including all the travel I’ve done and some of the obstacles I face, not to mention informing them of the existence of the
Canadian Federation of the Blind
here in Canada in 2020.

That website is where you can go to read the latest issue of The Blind Canadian, November 2019 where I am newly an assistant-editor.

I am thankful I had a meeting with the woman/writer I’m planning to walk the Thames River path with this coming September and with my friend and travel agent who is helping us plan the month long adventure ahead.

I am thankful for this new audio podcast platform.

We may use it to record and share daily updates as we go and I have started a profile there and have recorded my first two episodes. I will probably make these, as an audio version of my written blog, capturing the months ahead and all the planning and preparing I’ll be doing. It’s a cool site/app I can even add music to my recorded voice and I can do it without having to depend on my audio expert brother all the time. I think this one, it will be nice to be able to do it myself.

And I am thankful, last but certainly not least, for a mostly positive result on a blood level that had jumped in recent weeks for unknown reasons.

I have lived by that number for more than 20 years, creatinine to measure my transplanted kidney’s excellent function. I don’t remember it being more than 70-80 in years and suddenly I received a call that it had jumped up to 110.

I tend to lean into my more negative side with these sorts of things, but the doctor wouldn’t commit to the idea that my kidney is slowly declining. He said, at this stage, it could be that, but maybe 100 is my new baseline level. It happens and there’s no reason, at this time, to think anything further to be the case. I am getting re-tested in April and going back again in June for my once-a-year, usual doctor’s appointment.

But he did seem quite sure I’d be walking in England by September and that nothing renal related would get in the way of that. (Still…one more reason I want to do this walk, to help raise awareness, and to explore the world while I have the chance.)

I am thankful, extra thankful, to that hospital and the transplant outpatient program and the doctors that keep such a good eye on things for me. I am lucky to be living where I am living, as I hear more and more stories of the medical costs in the US that people live with.

To start 2020 somewhere, I was glad to participate in an entire month of blogging with prompts coming from certain participants of the yearly activity, participants such as
Wendy
and the blogger to run the whole thing. Thanks
Linda,
for getting my year started, with writing and blogging and your Just Jot It January #JusJoJan challenge, so I can at least begin somewhere for the year. 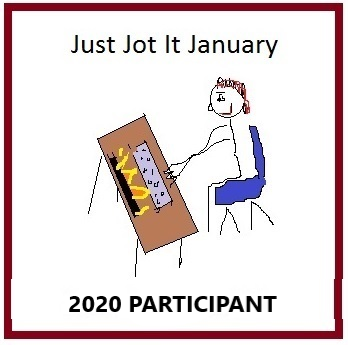 I am about to celebrate this blog’s six year anniversary and my thirty-sixth birthday – 2020 and I say “bring it on!”

One of my favourite Christmas time traditions growing up was to go for a drive on a snowy night to check out all the houses and their lights, coloured or all white. Didn’t matter, not at one time.

This holiday season I still feel grateful for so many things, including the lights of Christmas. It is not so easy to spot houses covered in lights anymore, but I am still thankful. Having traditions at this time of year helps to brighten my mood as the end of another year draws to a close.

And what a year it was.

I am unable to really see this photo now, but sounds nice anyway. Trees. Lights. Snowflakes softly drifting down.

December is here once more. I have a tree-like situation in my living room, lights outside on my house, and snow is starting here in my part of Canada, but all over really.

I am thankful for where I live.

I am thankful because I know Canada isn’t the greatest country in the world, but it is pretty great still. I am happy to see Justin Trudeau using social media, as is how it’s done these days, but he uses it without malice or ugly undertones.

The still current U.S. VP Joe Biden visited Canada this week and spoke to the Prime Minister and the representatives of the provinces, about climate change. It is close to many Canadian’s hearts and on many of our minds, the arctic, pipeline concerns, effects of oil on animal species, and severe weather patterns with melting sea ice. It isn’t so easy to ignore, but I know it isn’t easy to figure out either.

I know a lot of people who live here hate the cold and the snow of the long winter months Canada is so well-known for, but I can’t think of anything better than a still, silent, and snowy night.

I am thankful to have a mother who loves decorating for the holidays and she sets everything up for me, now that I am on my own.

Last year, around this time, our family found ourselves in a frightening situation, likely the most frightening we’d ever experienced, which is saying a whole lot.

It wasn’t so easy and somehow didn’t feel quite so important to decorate for Christmas, while we waited to see what my brother would be like when he woke from a sudden head injury.

Of course, as soon as the shock wore off and things began to look up, family and holidays were once more the priority and felt right to celebrate.

None of us, nobody in fact wants to spend Christmas in a hospital, but they are so nice to have when needed.

I am thankful that I can still see Christmas lights.

Who knows…next year this time…five years from now…ten and beyond. I’m living in the now and enjoying what I have while I have it.

I am thankful for the recognition that is still extremely necessary and is brought into focus on December 3rd, every single year.

International Day For Persons With Disabilities 2016

I am thankful for set plans made this week.

It feels good to see the plans forming officially. It will be here before we know it…before I know it. Preparing. I can and I will do this.

I am thankful for the help I’ve received so I can be comfortable with my stuff I will be taking with me, my ability to read and write, and to just fit in and be another member of the class.

I am thankful for the guidance from my writing mentor, a wonderfully helpful local travel agent, my parents, and all the family members who have been so supportive of me wanting to take on a new adventure in 2017.

I am reading New York Times articles about a place of art and that goes by the name, translated from Spanish, to mean “House of Frogs” I believe. Better than “House of Scorpions” as I am a little more nervous at the thought, ever since I read “The Pearl” in high school.

The Pearl by John Steinbeck

I’m thankful that I sold two more copies of the anthology where my story can be found, from 2015.

After The Scars – A Second Chances Anthology (Goodreads)

One minute, it went from the reading material from off of my shelf, to use for scanner practice, and then suddenly two copies were being requested. A lovely surprise.

In the last month or two I’ve gotten my anthology possibly sent and traveled all the way to Australia and now a copy will surely live at a school for the blind that I did not attend, but I know lots of people who did.

I thought I would combine the TToT this week (after missing last) with Kristi’s
Finish the Sentence Friday.

I will be writing my own brand of a 2016 summary, but I thought I would celebrate a little first.