We’re so far keeping up with our goal of recording one episode a month in 2018 – we’re getting this one in, just under the wire, as May turns to June.

Episode 12: British C or B Columbia – KETCHUP ON PANCAKES

Travel is one of our favourite topics and this one takes us back to our trip to western Canada at the start of the month. 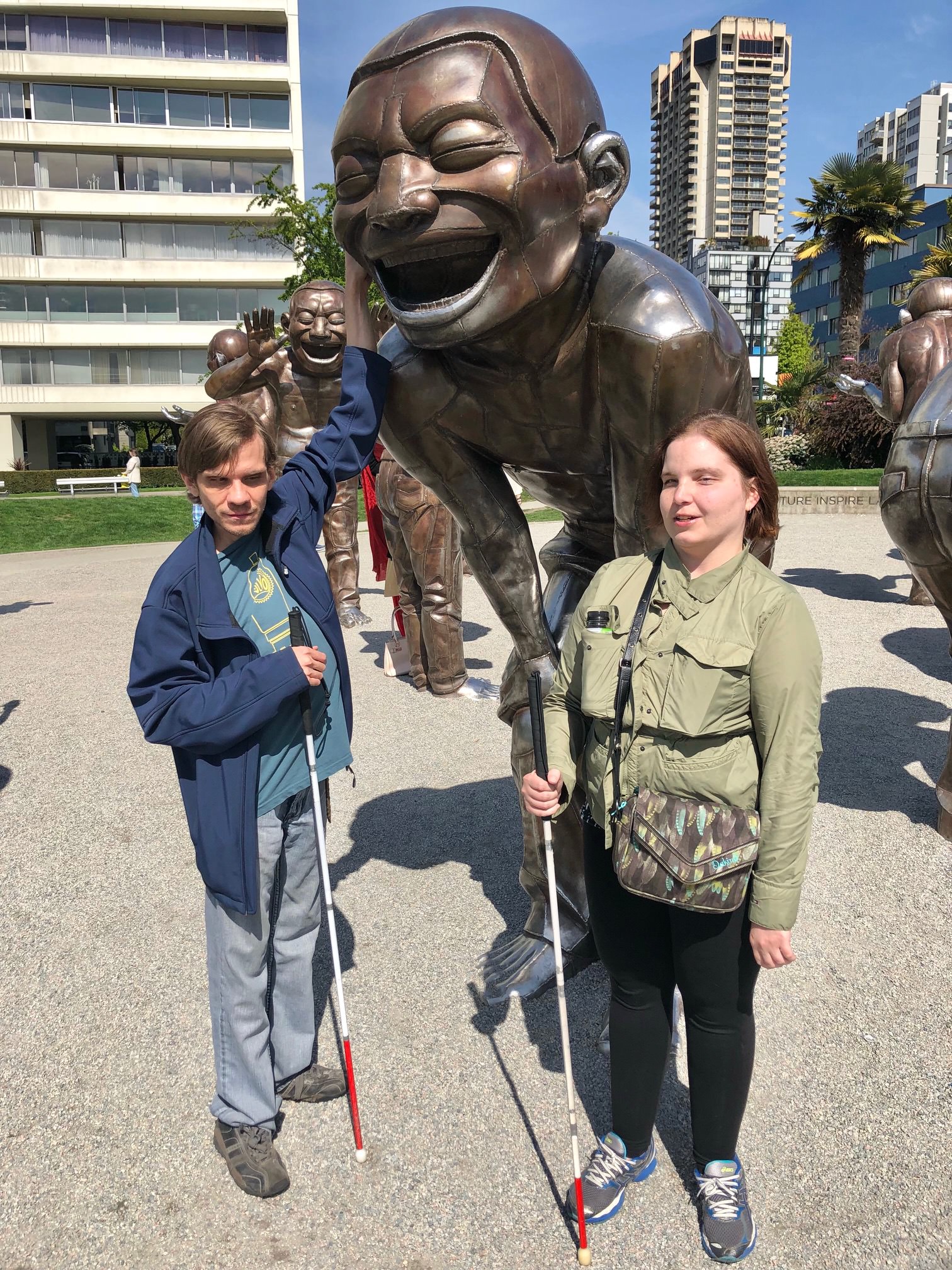 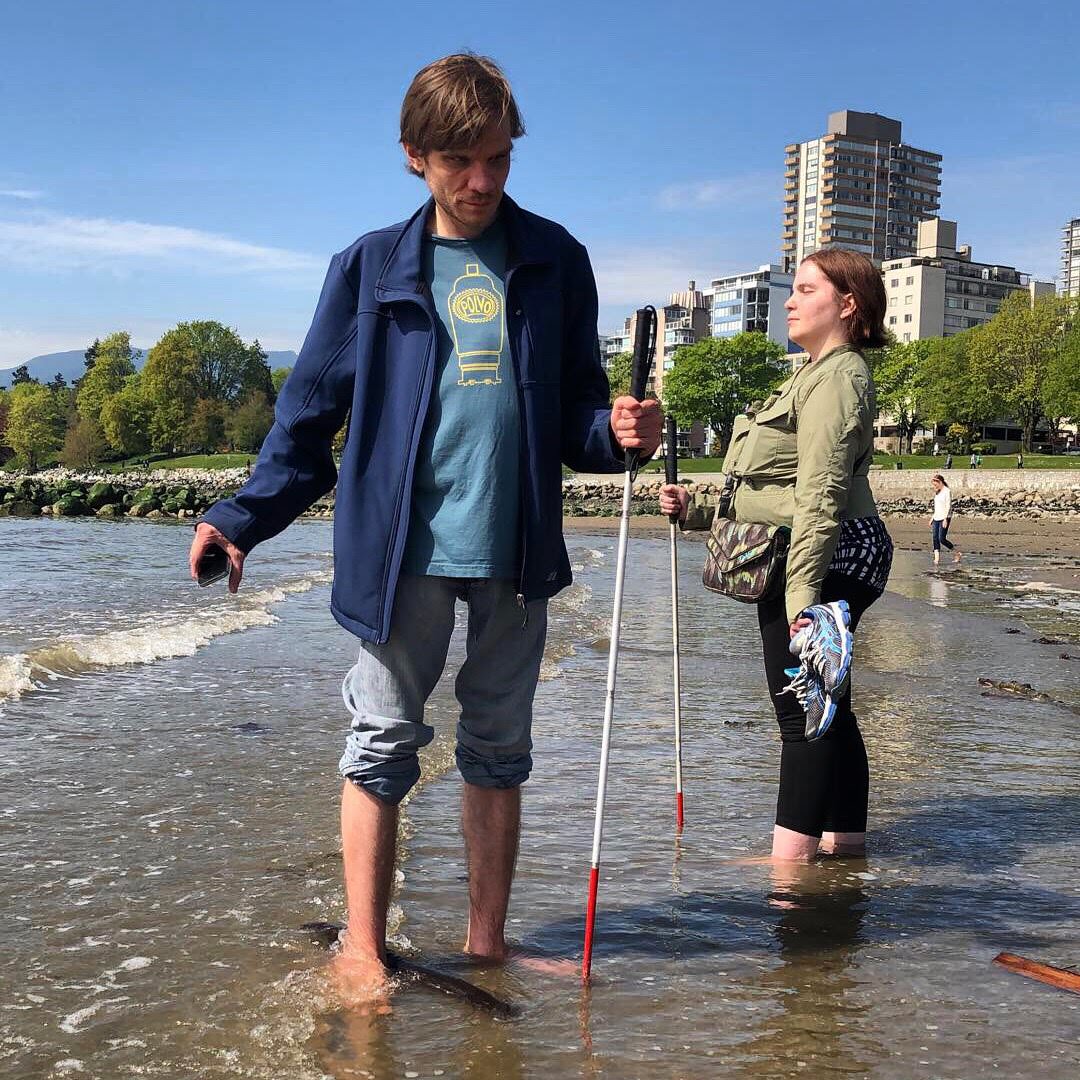 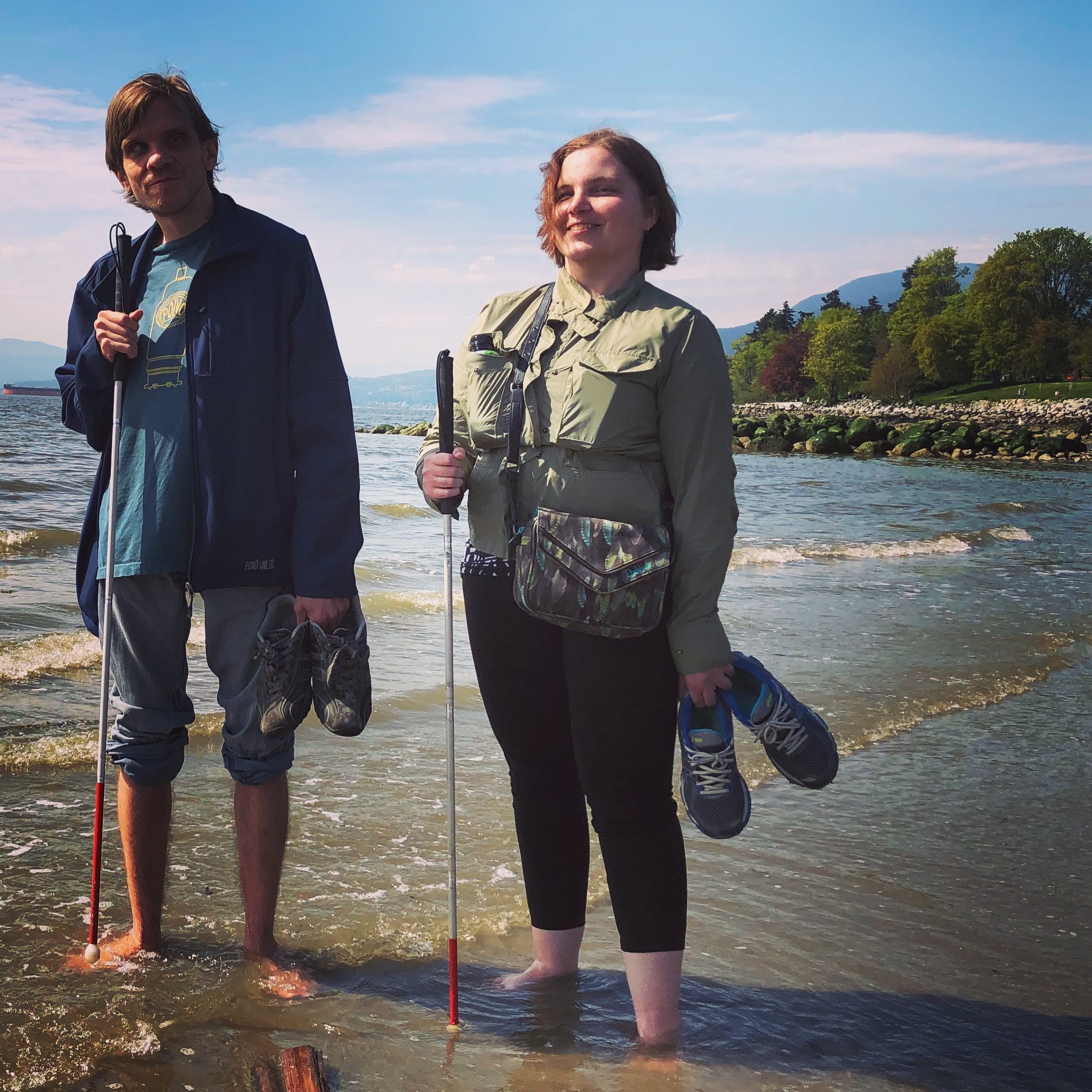 Sound clips included, to bring us back and you along with us, and we end with a Throwback Thursday and an odd Niagara Falls memory of sibling silliness.

British Columbia – Vancouver and Victoria are some of the most splendid spots in Canada and we invite you to come along on the journey. Come stand in the Pacific Ocean, ride the Vancouver Sky Train, and then return to Ontario and stand with me, at the railing of Niagara Falls.

Adventure is just around the corner, the next bend up ahead.

“Vision is the art of seeing what is invisible to others.”

I have been away for a few weeks, most recently in British Columbia and before that, I guess I couldn’t seem to organize my thankfuls, but a visit to the ocean is good for a little perspective. 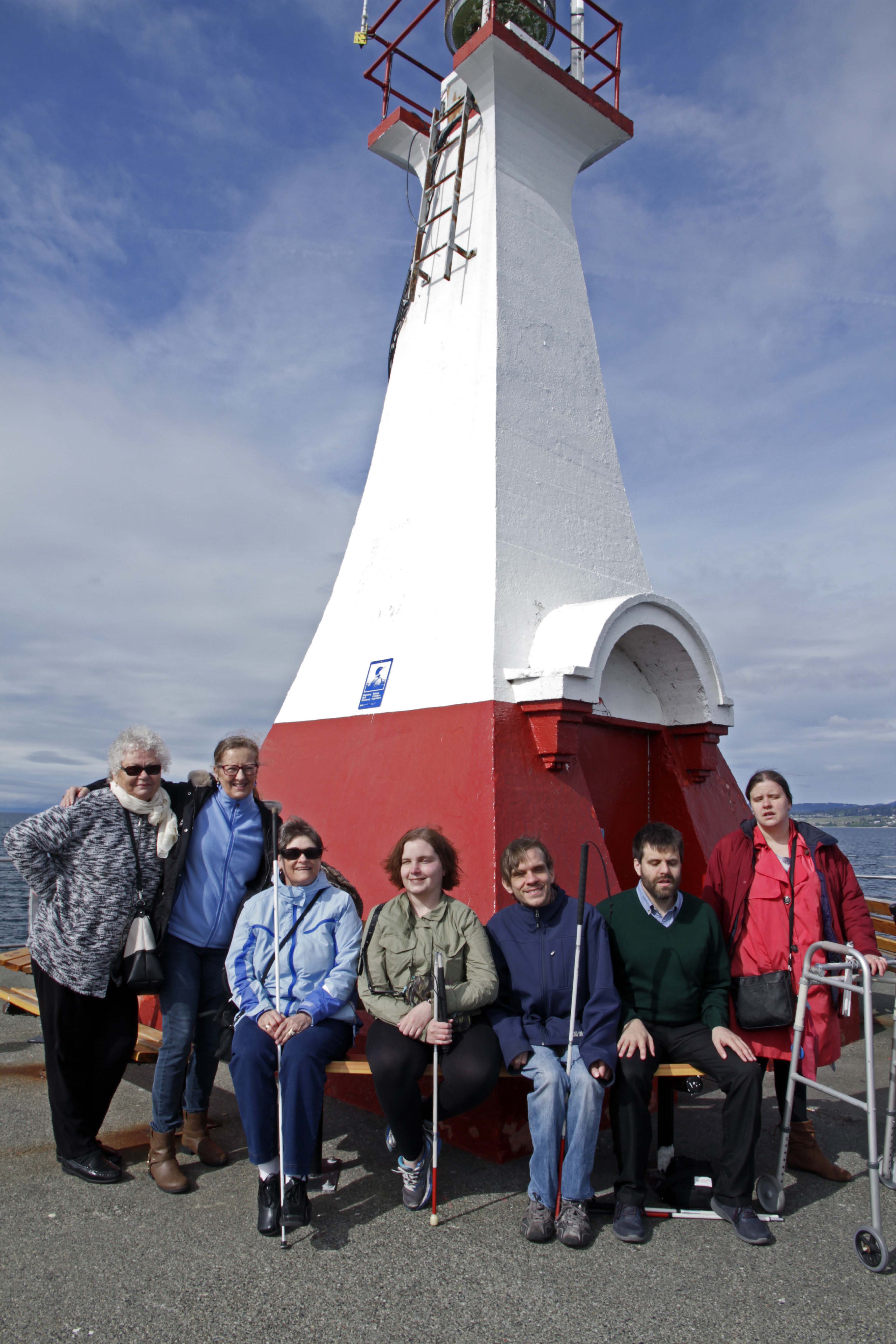 Caption: Sitting with my group, by the lighthouse, at the end of the breakwater in Victoria.

Speaking of, “Organize” was the theme of the 2018 convention for the Canadian Federation of the Blind, in Victoria, BC.

I’ve probably flown ten times or so in my life. Every one of those times, I hold my breath as the plane speeds down the runway, takes off, and lands again later on. I get nervous, clench my hands into fists, and then try to just go with it.

Through all that, through every bump and jostle of turbulence, I am grateful to feel that there must be a super capable person in charge of flying that aircraft.

This time, flying across Canada and back, was no different.

I’m thankful for a mostly accessible place to stay.

The hotel was a lovely one, with braille in the elevators, marking each floor as you stepped out, all except braille or other tactile numbers on the room doors.

The guy at the desk when we checked in even thought, without us having to suggest it, to stick a piece of tape on each ID key card.

By the end of five nights staying there, I started to feel at home. It was wonderful. I walked around the lobby and the floors with relative ease, even with the drunk group on my floor the one night.

“Blind woman coming,” one of them announced, the loudest of them all. “Stay to the right.” This I already knew.

I couldn’t resist turning back to him, as I walked right to my room door and went to pull my card out, to inform him that my name was Kerry and to: “have a good night.”

I’m thankful for a writer with a car.

A friend of some heard I wanted to visit a few specific places during my Victoria stay and generously offered to drive.

We took cabs otherwise. I did a lot of walking as it was. I appreciated the ride.

On the first leg of that driving, we got to know each other and I discovered she is a writer too. After that, we had plenty to talk about.

I’m thankful for the breakwater.

Up until recently, this long walkway sticking out into the sea, with the lighthouse at its end, had no railings. It wasn’t quite so safe when you couldn’t see.

Now it had railings and I could walk out into the water. I was in heaven out there, as windy as the day was. I never wanted to come back in.

I’m thankful for a welcoming tour of an historic bookstore.

My new writer friend knew the manager and we were greeted warmly and given some in depth backstory about the building and the owner, who once was married to Alice Munro and is famous for that union.

I’m thankful for a comfortable and also stimulating day of discussion, listening, and new friendship.

It was the largest group for its convention. We from Ontario were celebrated and welcomed guests in attendance for the first time.

There were talks and discussions throughout the day on Saturday, making it a long one, but oh so worth it.

Being in a room where almost everyone is without sight, there was help and understanding assistance from everyone, from where to find an available seat or to feeling free to speak one’s mind. We didn’t always agree on every issue (universal design, accessibility, guide dog issues, career search, disability awareness), but we all were there to listen to each other.

We even had a few special visiting guest speakers: one was an expert on advocacy from University of Victoria and the other on social media trends.

I’m thankful for compassionate and passionate sighted allies and their ideas.

As nice as it is to join together as those living as blind Canadians, as essential and important, it’s good to be able to share with understanding people with sight too.

The writer/driver and her partner were there, along with a university student film maker, to capture the day’s events and they decided to interview some of us, for development of a possible short documentary called Listening To Blind Canadians.

In her car, she told us how she knew one of the women from the CFB and their parents had found companionship with each other in their later years. She didn’t seem to be fascinated by blindness in any artificial kind of way, like we were some sideshow to her. Just that she wanted to be there, as a friend and ally, to bridge the gap and promote a wider understanding through shared humanity.

From the BC Ferry Service employees, who helped us on and off and to comfortable seats to many public transit (Sky Train) workers who helped us find the next train, the right one.

We decided to do a ferry ride to the mainland and back, in one day. We went to check out Vancouver and meet up with my brother’s friend for lunch.

We did mostly traveling though, met another blind person on the bus and traveled part of our way with him, and yet I even got to walk into the water of the Pacific.

Even one of the fellow CFB members, also attending the convention, was a big help. He was around and free to go along with us, knew the city of Vancouver pretty well and had lots of practice riding those trains.

I’m thankful for delicious salads on my travels.

It was greens, seeds, cucumber, a sort of sweet vinaigrette, and the freshest little cherry tomatoes.

Last time I found a delicious salad like that, I was in Whitehorse, Yukon.

I’m thankful for those who came before.

We were able to travel on buses and trains independently, knowing our stop was coming up, all because of an automated announcement of streets. I take this sort of thing for granted, but it wasn’t always the case. There were people who demanded that service and had to fight for it.

I met the CFB treasurer, who was born in the UK, who wrote a book
The Politics of Blindness
and then I finally managed to read that book.

Here’s to the beauty of Canada’s west coast and to organization, to truly make a change.

This week’s
Song Lyric Sunday
is all about the singer/song writer.

This is a song from the album of that same name, which was released on my brother’s birthday, the day and year he was born, and my brother’s name is the same but just not spelled that way.

Bryan Adams, singer/song writer from Canada, may not be known to all. His biggest hit to date was likely “Summer of ’69” but it’s “Into The Fire” the song that first struck me when I heard it on my brother’s video tape of Bryan Adams music videos.

We used to watch that video of videos over and over again, when we were growing up. My brother’s musical tastes have moved on since the 90s.

Bryan Adams recorded the entire album in his recording studio, in his own Vancouver home, by the sea. It was known as Cliffhanger. This I never likely would have learned, if I hadn’t gone to do a little extra research for this prompt. So glad I did.

The raw lyrics in this song are shown above, but to me I remember his face moving forward to the mic and away again, once a line had been sung. The background was dark enough behind him that I could see this when we watched throughout the 90s. The image of “into the fire” caught my attention, even then. It illustrates that life is hard. It can be painful. It made me pensive and it makes me cry.